My Top 5 Ways to Delay (or stop!) Purging 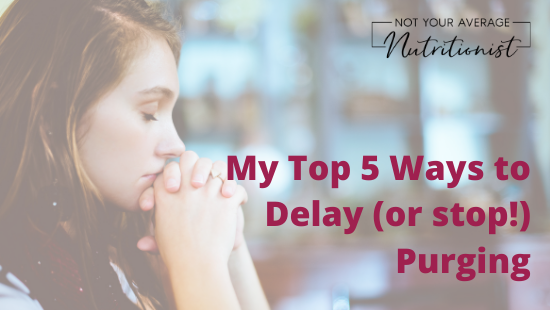 Abby is a second-year master’s student in Nutrition and Dietetics at Meredith College in Raleigh, NC. Abby currently works at a recovery center and enjoys reading, trying new recipes, exploring local trails, and snuggling with her pups.

Creating and utilizing a toolbox of skills while recovering from an eating disorder (ED) allows you to successfully cope and manage urges as they arise. With coping skills in our back-pocket, we can cope ahead when we know that triggers are coming (ex: a challenging afternoon snack, having a meal with family or friends who are not always helpful, etc).

Unfortunately, urges to engage in eating disorder behaviors sometimes pop-up unexpectedly, and coping ahead is not an option.

Purging, in its most traditional sense, is a common way to cope with negative emotions that may arise after consuming a meal or snack. Individuals may purge through SIV (self-induced vomiting), exercise abuse (ie: “burning off” or compensating for foods/drinks through intentional movement), or laxative/diuretic/diet pill misuse. Purging may occur after a meal or snack or before as a way to “earn” future food, like doing compulsive exercise before a meal.

Acting on purge urges may temporarily quiet the ED voice that brings guilt and shame after eating. ED may bully you into believing that a meal or snack wasn’t deserved and that compensation through purging is the only way to become “worthy” again. Other times, the physical sensation of fullness brings a whole new wave of negative emotions. Feeling full, while a completely normal human sensation, is often uncomfortable as you embark on your own recovery journey and purging may seem like the only way to alleviate this sensation.

This relief you may feel after a purge is only temporary and purging behaviors bring a whole slew of mental and physical repercussions such as electrolyte imbalance, macro and micronutrient deficiencies, dental damage, acid reflux and heartburn, renal conditions, and esophageal tears (read more about Mallory Weiss Tears here) (1). Worse, the drop in vasopressin (or antidiuretic hormone) that does physically occur creates a reliance on ED to keep getting the feeling of relief (3).

Delaying, or completely avoiding, a purge is absolutely possible with the right skills and the right mindset.  Create a list of alternative activities and skills to use when the urge is at its apex (when you are most distressed/uncomfortable). Don’t know where to start? That’s okay! Here are a few ideas to get you going:

My top 5 ways to delay or avoid a purging episode:

1. Urge Surf: (2) The first step in delaying a purge is to urge surf. This method is easiest broken down into 4 distinguishable moments of an urge: 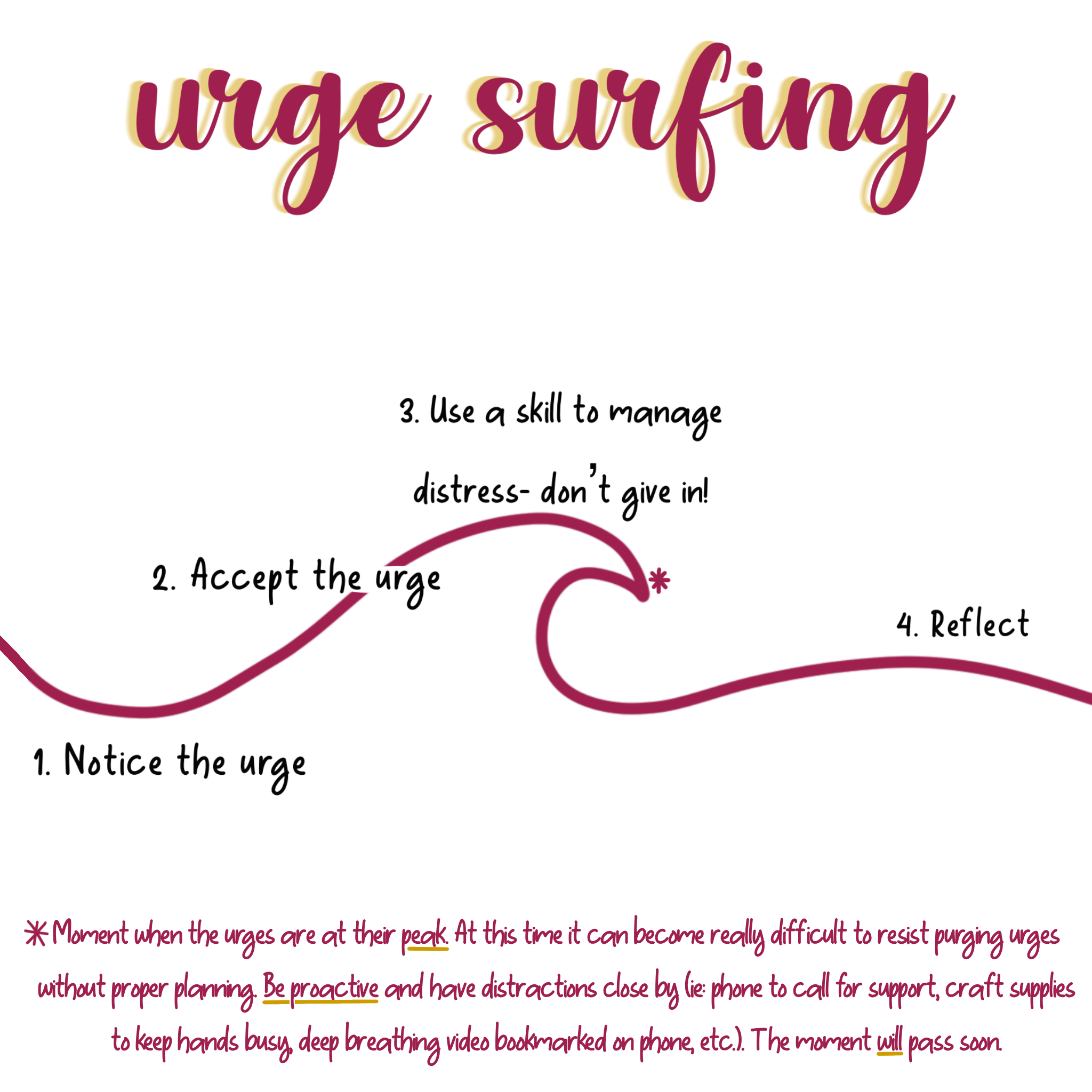 Call a friend or family member to chat after acknowledging purge urges. Talking to someone you enjoy is a great distraction skill to use when urges are high. You do not have to discuss your ED if you aren’t comfortable doing so. In fact, light conversations about pets, happy memories, and hobbies may decrease the current anxiety and urges you are experiencing.

If you are experiencing purge urges after (or before) meals and snacks, plan ahead and strategically place items nearby to keep you busy or distracted immediately after eating. Things like knitting needles with yarn, fingernail polish, colored pencils and paper, a good book, puzzles and crosswords, and instruments all require your attention and can distract from the urge at hand. Keep busy until you notice that the urge has quieted, then reflect.

4. Set boundaries for yourself

Creating boundaries for yourself after a meal or snack may help reduce the likelihood of acting on purge urges. These may look like avoiding the bathroom an hour after a meal or snack, avoiding exercise equipment when urges are high, etc. It is important to know your own triggers and understand environments that may increase the likelihood of acting on an urge.

Use grounding techniques to distract from the urge. This may look like counting colors in the room, practicing breathing exercises (like square breathing), body scanning meditation, holding an ice pack and focusing on the sensation of the temperature change, and progressive muscle relaxation.

If you are currently experiencing purge urges, go ahead and practice urge surfing and pick a distraction skill listed above to help you “ride the wave.” If urges are low, or non-existent at the moment, make a list of things you can do next time you are experiencing loud ED thoughts to purge. Practice coping ahead by making a plan to use this list next time urges are high.

If you or a loved-one is struggling with disordered eating behaviors, such as purging (or Bulimia Nervosa), contact Not Your Average Nutritionist to see how they can help you have a better relationship with food. Full recovery is possible!