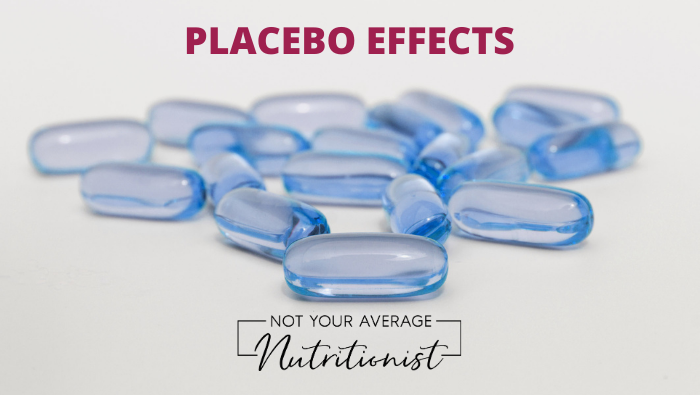 People intrinsically want to believe and have hope in something. When “big-pharma” and doctors are not making patients feel significant and understood, people will go searching for healing elsewhere, this is where dietary supplements (DS) come in. Most DS work under the realm of “placebo effects,” unless they are being used to treat a nutritional deficiency.

The definition of “placebo effect” is, “improvement in the condition of a patient that occurs in response to treatment but cannot be considered due to the specific treatment used(1).” This phenomenon has been identified in several studies. One of which was a study of patients with irritable bowel syndrome (IBS) which “treated” patients with either “open-label placebo (non-deceptive and non-concealed administration)” or no treatment. Even knowing that the pill they were given was a placebo made of an inert substance, the sufferers found significant relief over those receiving no treatment. The conclusion was that “Placebos administered without deception may be an effective treatment for IBS (2).”

Doctors have long-known the benefits of placebo effects in patients and will utilize this in treatment. While the “placebo” thinking may help people heal, “no-cebo” thinking can render even an active drug useless. This phenomenon is summed up well in Henry Ford’s famous quote: “whether you think you can or cannot, you are correct.”  It may be that doctors owe it to their patients to boost healing by any means possible, including treatment by placebos for more effectiveness (3). Nonetheless, the American Medical Association stated in 2006, that it is unethical for doctors to give patients undisclosed placebo treatment/medications (4). If doctors are ethically not allowed to give undisclosed placebos, then suggesting a DS labeled, “This product is not intended to diagnose, treat, cure, or prevent any disease” might be their way around this ethical dilemma.

Psychological effects of placebos
The placebo effect often is used, consciously or not, in the context of classical conditioning. Discovered by Ivan Pavlov, classical conditioning takes a neutral stimulus (which should cause no response – the “placebo”) and, through learned response, makes it a conditioned stimulus to elicit a conditioned response (5). An example of this in the medical setting would be giving a patient a pain medication that actually works to reduce pain every day for five days, then giving a sugar pill that looks the same on the sixth day and eliciting the same pain-reducing response.

The conscious expectations by a patient of a treatment to work may cause an inert substance to have a desired effect on the patient. These expectations can be elevated by how the health care professional (HCP) interacts with the patient. The study of medicine “generally does not pay adequate attention to psychological and social variables (6),” which are determined by the relationship of the HCP and patient. This may interfere with drug study controls. If the person in the placebo group of the study is getting attention and believes the treatment will work, then they may exhibit signs of the placebo working that may make the active treatment not have a significant desirable outcome over the placebo.

Yet, how can an inert substance elicit a similar response to an active treatment? A large part of this stems from the psychological variants at play. Much of the patient’s outcome may be determined by the HCP’s confidence in a treatment’s ability to work, empathy, active listening, and care setting. “[it is] suggested that the success of the many forms of psychotherapy [are] due to a placebo effect rather than the distinctive features claimed by the different therapists (6).” Hope that it will work, and follow-through on actually seeking treatment, are other reasons that patients have better outcomes with either the active treatment or the placebo (7). DS are often prescribed either by licensed HCPs (like doctors) or “alternative healers” (like acupuncturists). The diplomas on the wall, or the attention given by the healer can contribute to the patient “feeling” the DS responding to treatment. Additionally, since chronic conditions often ebb and flow with severity, the patient is likely to look for treatment when symptoms are about to naturally decrease, leading to the belief that the DS “healed” them (8).

Physiological effects of placebos
Placebo effects are not “all in the head” as once thought. They can make actual physical changes in the body, under the right circumstances. A test group for an antidepressant medication versus a placebo showed interesting brain activity in the results. By viewing brain activity with fMRI studies, placebo responses increased activity in the prefrontal cortex of the brain, while the medication suppressed this activity. Both groups exhibited less perceived depression, though on different timelines (the drug working weeks faster than the placebo). To this finding, researchers said, “administration of an inert pill appears to be an active treatment rather than a no-treatment comparison as previously thought. [however, the] placebo response is not equivalent to an active drug response, since the two groups’ brain physiology was altered differently (7).”

Even people with Parkinson’s disease can potentially have real physiological benefit from placebo “treatment.” The effect of the placebo increasing dopamine in the brain, modifying the neuron that is promoting the abnormal activity that causes the tremors (9). People in this study physically had reduced shaking while taking the placebo, showing that there is true physical effects in some placebo “treatments”.

Studies should have tighter placebo controls
The Food and Drug Administration requires new drugs to significantly outperform the placebo control before going to market (3).  Placebo controlled, double blind trials have been the gold standard of research (8). However, most research studies for medical treatment (whether drug, DS, surgery, or other) could be better controlled for placebo response. This could be met with a few tweaks to methods of “treatment.”

Dr. John Farrar, a neurologist and epidemiologist, provides some insight into what can strengthen study design to control for placebo effects (3):

Regardless of the methods, we should approach all supplements, drugs, surgeries, and remedies with caution, and once a decision for treatment is made, have full faith that it will work – then we will see results.