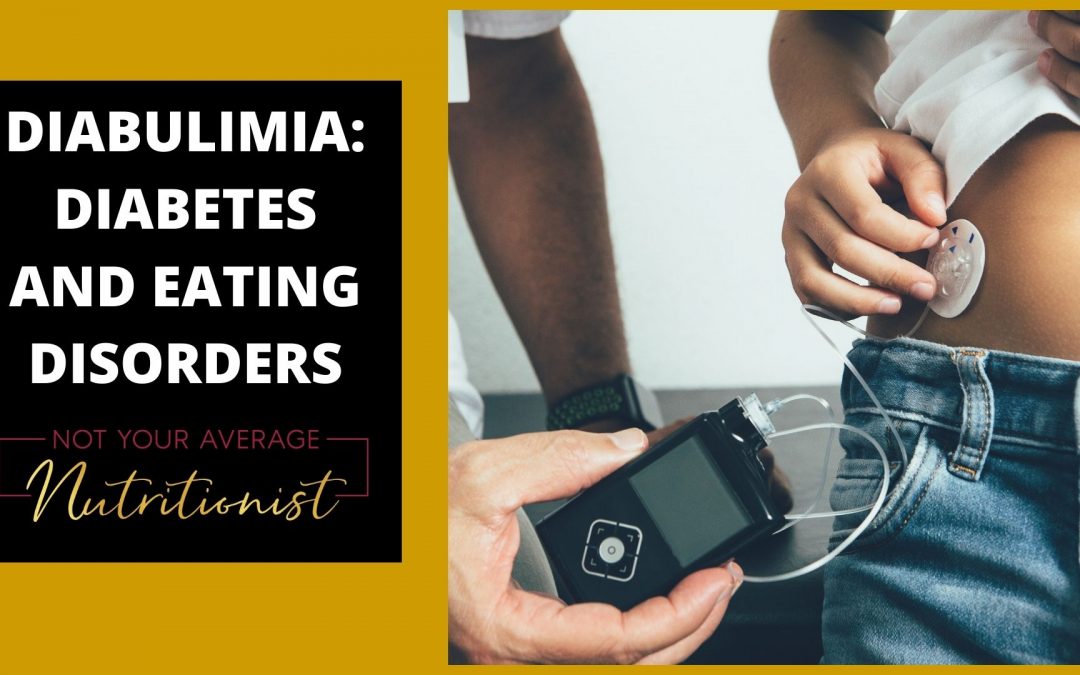 By Lauren Hogan. Lauren is currently (2021-2022) a dietetic intern with Illinois State University and is ecstatic to be one step closer to becoming a registered dietitian! She completed her B.S. in Applied Nutrition through Cal Poly, San Luis Obispo (June 2021). Lauren holds true to her heart the beauty of empathy and compassion when working with people and clients. Her favorite kind of dog is a beagle; and with her free time she enjoys skiing, crafting, pickleball-ing, and biking (on her tandem bike).
Type 1 diabetes is a difficult addition to an already busy lifestyle. Throw in the added stress of school, work, and family; it can be very overwhelming!

As you may know, there are two different kinds of diabetes: Type 1 and Type 2. Most people with Type 1 genetically inherit risk factors and then environmental factors trigger for it to develop. However, Type 1 is not caused by lifestyle factors (i.e. exercise, food, smoking) like how Type 2.

So what is this insulin that seems to be the essential piece to the puzzle? Well, insulin is a hormone that helps your blood sugar levels stay stable by allowing the body’s cells to take in sugar (glucose) from the blood (which came from our food) to use as energy. When there is not enough insulin (Type 1) or there is an insufficient ability to use insulin (Type 2), the glucose is not properly taken up into the cells from the blood. This build up of glucose in the blood leads to high blood sugar levels (hyperglycemia) or excess glucose released from the body through urine (more on this below).

Blood sugar going to our cells is how we create energy by using glucose to create ATP (energy) in our mitochondria (any biology class flashbacks?). To have the glucose building up in our blood not only makes us have less energy, but leads to dangerous medical complications outlined below. .

Diabulimia is not when a person specifically has diabetes and bulimia, despite its name implying. Diabulimia is rather the term given to someone with Type 1 Diabetes who administers insufficient insulin for the purpose of weight loss. 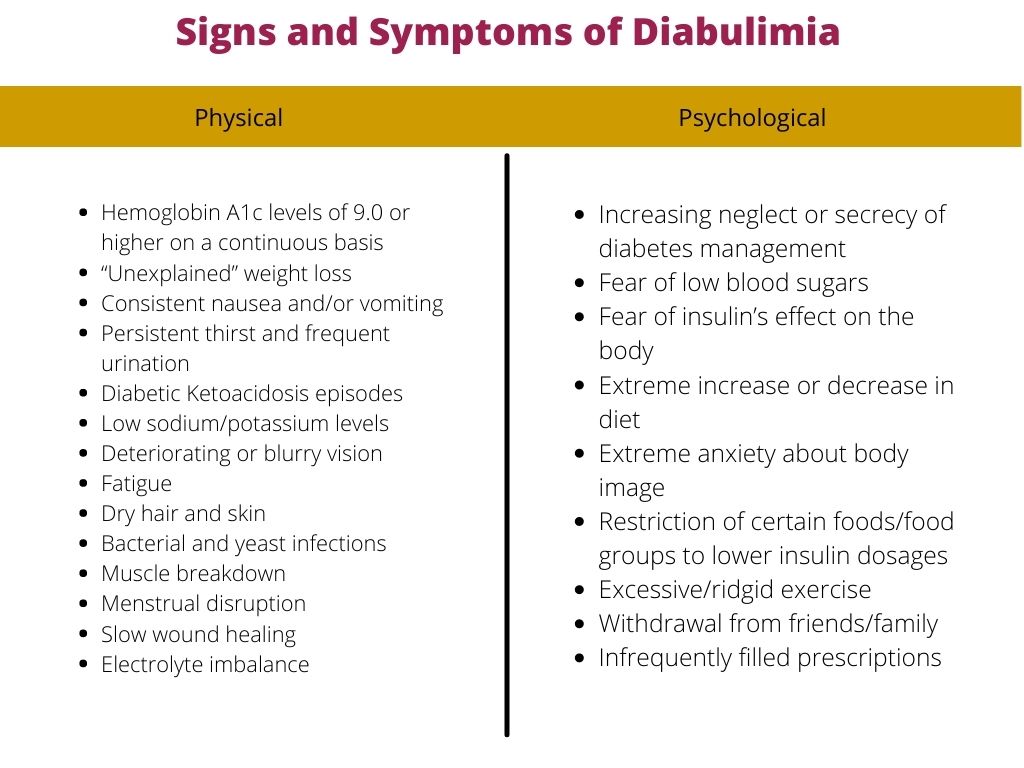 Effects of Diabulimia (and a look into ketones)

Our bodies are extremely resilient. Even with high blood sugar, people with diabulimia are able to function better than expected. Therefore, the main cause for concern is the prolonged effects of high blood sugar. Along with the signs and symptoms listed above, another effect of insulin restriction/high blood sugar is that people with Type 1 Diabetes can develop dangerous levels of ketones much faster than others.

In response to low levels of insulin/glucose, the body releases fat stored in fat cells to be broken down in the liver into chemicals (this process is known as ketogenesis). These chemicals are called ketones, which become an alternative source of energy. They are used in place of the insulin/glucose duo as what is transported from the bloodstream into the cells for energy. Ketones are like the bench players that the coach would much rather not have starting the game when the star player (glucose) is available.

Now, the word ketone may sound familiar, and that is because it sounds a lot like, and is related to, the Ketogenic (Keto) Diet. The well-known Keto Diet is hallmarked as being the low-carbohydrate, high-fat diet that keeps carbohydrate consumption less than 50 grams per day (sometimes even as low as 10-20 grams). When following a low carbohydrate diet, your body enters a state of ketosis, which is the accumulation of ketones in your blood to then be used as energy.

Typically followed as a form of weight loss regimen, the Keto Diet and state of ketosis is not necessarily helping your body. After a few days of carbohydrate restriction, you may experience something called the “keto flu” (stomach pains, dizziness, fatigue). Although this flu-like state may pass, ketosis can have more serious side effects: dehydration and changing of chemical balance of your blood. Additionally, ketosis is not as efficient, requires a lot of work, and does not supply energy to cells in our bodies that do not have many/any mitochondria (these cells are carbohydrate-dependent for their energy).

For people with Type 1 Diabetes, the ketones build up in the bloodstream much faster, which causes the blood to become acidic (a lower pH than the healthy blood pH of 7.35-7.45). The excessive buildup of acidic ketones in the blood is known as diabetic ketoacidosis.

So, why does acidic blood and diabetic ketoacidosis matter? Well, when too many ketones are produced too fast, they can build up to dangerous, acidic levels in your body. The acidic blood and build up of glucose causes damaged blood vessels (specifically in the eye), nerves (in hands/legs, nervous system, and digestive system), and organs (kidney, heart, and liver). Additionally, changes in a person’s blood pH can actually cause organ system shut downs (this can result in coma, stroke, and even death). We love homeostasis! 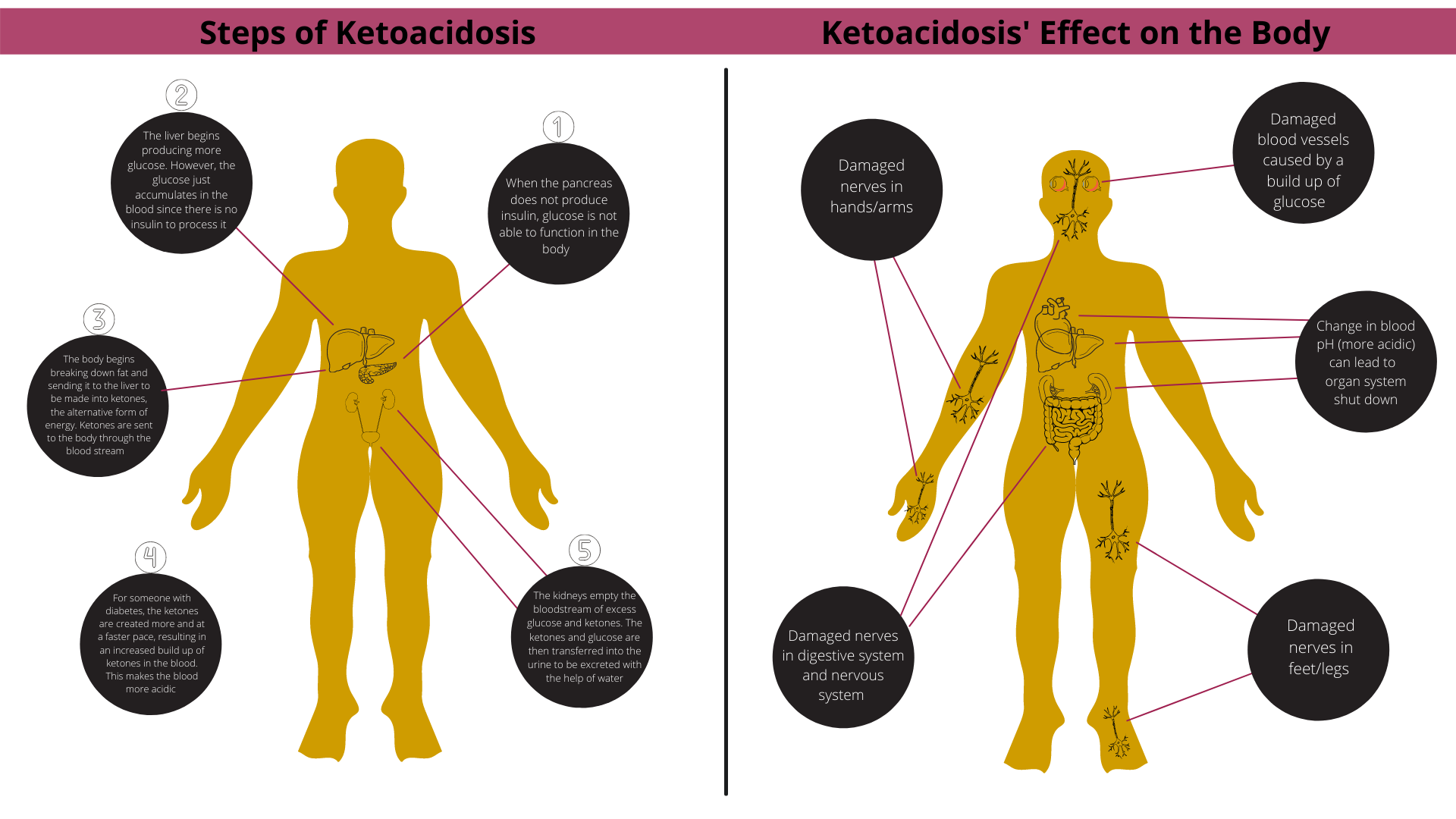 Why do Diabetes and Eating Disorders Co-Occur?

To manage Type 1 Diabetes, people who are diagnosed need to have insulin therapy (through injections or a pump), count their macronutrient intake (focusing on how much carbohydrate is eaten in a sitting), and frequently monitor their blood sugar. It can surely be a lot of regulating and checking, which can be both time consuming and stressful. This constant monitoring can play into the eating disorder’s love of controlling intake and making food into numbers.

Additionally, an early sign of Type 1 Diabetes/low insulin is some weight loss, which otherwise would not occur with insulin therapy. A reduction in overall body weight can occur from the usage of fat stores for energy when glucose is not used as energy, and a loss of calories from the excess glucose that was excreted in the urine (termed glycosuria) Typically, urine contains no trace of glucose; however, with Type 1 Diabetes, the urine has higher traces of glucose which are lost calories.

The addition of insulin through insulin therapy is prone to cause weight regain because more insulin means less calories lost through excreted glucose in the urine and less ketone production/fat storage breakdown. This fluctuation in weight management can be triggering for some, which can lead to the impulse to want to restrict insulin doses to reduce weight regain. Studies show that people with type 1 diabetes are two and a half times more likely to develop an eating disorder than other women. Diabetes management involves a complex interaction of factors such as insulin, blood glucose, emotions, and body image that involve both diabetes care and mental health.

For young women in the U.S, the risk of developing an eating disorder during college can be as high as 40%. However, for young women with diabetes, this rate doubles. Research suggests that over 30 percent of women with type 1 diabetes between the ages of 15 and 30 engage in insulin omission to some degree!

You are not alone

It is always good to have a reminder that you are not alone. There are people that care for you and people and resources willing to help. A treatment team of Certified Diabetes Educator/Medical Provider, Eating Disorder Registered Dietitians and Therapists are essential.  A hotline number for people with diabulimia is open for service 24 hrs a day at the number (425) 985-3635.

If you have more questions, please reach out to the team at Not Your Average Nutritionist for help getting your eating disorder under control. 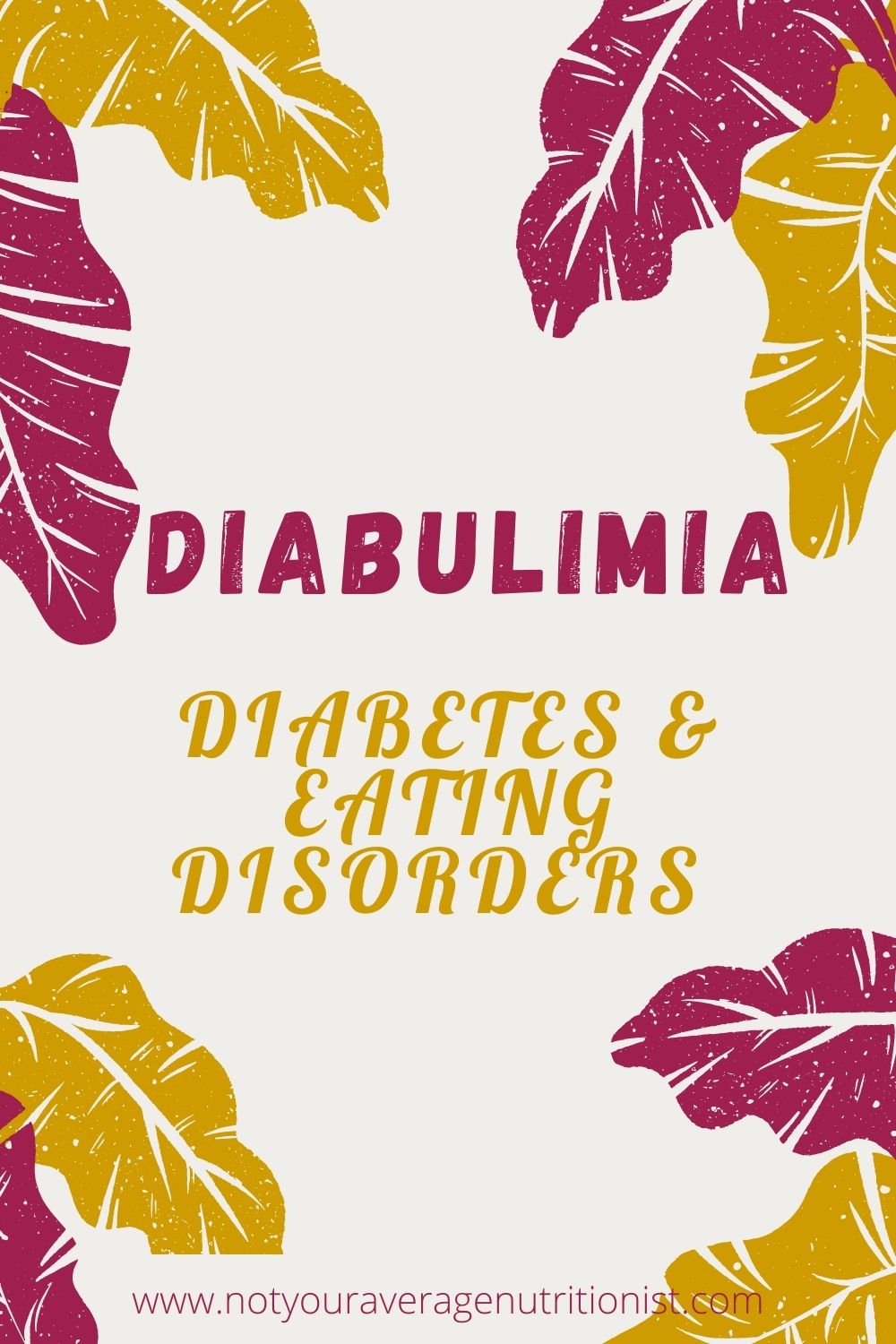 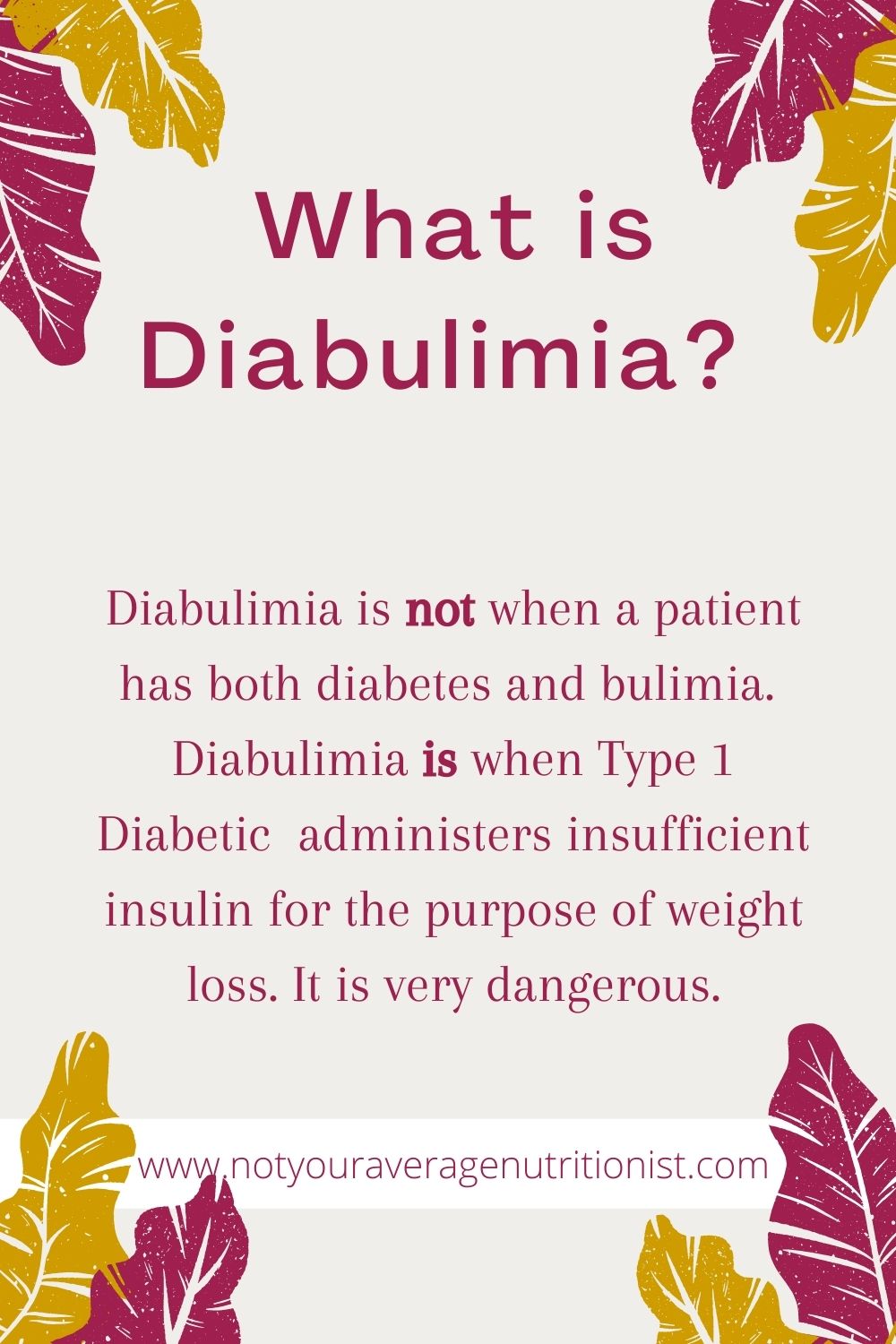